Who we are, and yes, we believe the earth is flat!

The flat earth revelation is nothing short of profound. Flat earth changed everything. In 2015, I started my YouTube channel Celebrate Truth in order to promote God’s own Testimony concerning His creation, and by 2017, I put on the very first Flat Earth Conference in the world at the Embassy Suites in Raliegh, NC, USA. The following year, FEIC made another first when arriving in Canada at the West Edmonton Mall. Denver and Dallas successively followed in the United States.

I can’t help but think about the media exposure FEIC received from all over the world. CNN, ABC, CBS, FOX, NBC, RT News, InfoWars, The New Yorker, Popular Science, Newsweek, and so many more! The truth is important. FEIC was never simply about bringing a community together. It pointed us towards the Creator of creation. Jesus is the truth, and through Him, people everywhere are being set free. The world has taken notice. Flat earth is bringing an untold number of people to The Way, The Truth & The Life (John 14:6).

Many have asked where FEIC will be held in 2020. Leading up to the 2019 conference, I had already considered Dallas to quite possibly be my final conference, and by October of 2019, those suspicions were confirmed. Indeed, the 4th Flat Earth International Conference in Dallas was to be my last.

This chapter of my life is coming to a close. Though I will always hold the flat earth to my personal convictions, I do not foresee it becoming a primary focus in business or ministry in the immediate future. Thanks again for all of your support and love over the last few years. It always brought such joy to my wife and me to hear and see what FEIC did for the community and individuals across the world.  I will miss everyone but this is not goodbye.

It was such an incredible ride. I’ll never forget it.

The Flat Earth International Conference is an educational endeavor composed of individuals and organizations uniting around the common purpose of the true scientific inquiry of the created earth.

Most people today subscribe to the espoused heliocentric globe model explanation of our cosmology, which contends that:

However, every experiment ever conducted to prove even the simple spin of the earth has failed!

Join us this November to learn why we dissent from the spinning heliocentric theory of cosmology. At the 2018 Flat Earth International Conference, we will uncover and debunk pseudo-scientific “facts” while presenting the true evidence which shockingly points to our existence on a flat, stationary plane.

The 2018 Flat Earth International Conference (FEIC) is the 2nd annual conference hosted by Kryptoz Media. FEIC features presenters from various backgrounds and belief systems who have each made an impact on the larger Flat Earth community. FEIC is not in any way affiliated with the Flat Earth Society.

“People still believe the earth is flat!?” We maintain that the earth is flat and stationary, but we weren’t born into this way of thinking. Like you, we grew up believing in a heliocentric globe-earth model. After extensive experimentation, analysis, and research, we have come to know that the truth of our cosmology is not that which we’ve been told.

“Will I fall off of the edge?” No. Though there are varying models within the flat earth community, the most commonly depicted model of our earth is that of a circular disk with Antarctica serving as an ice wall barrier. Example: 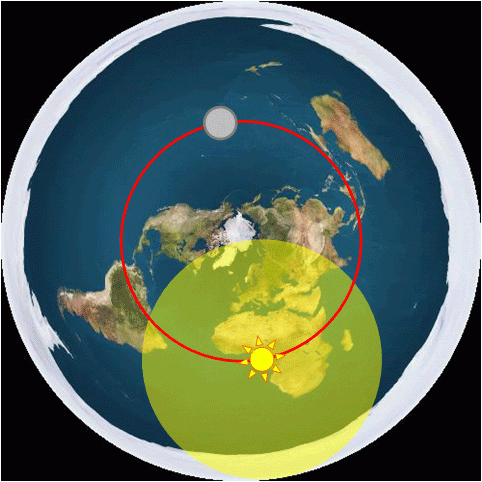 “Is NASA lying?” We believe that government space agencies are taking creative liberties with your tax dollars and producing misleading materials. Did you know that all images of the earth which show a curved horizon or a spherical shape are: